As the capital city of Illinois, Springfield makes up as the state’s 6th most populated city. As of 2019, Springfield’s metropolitan population included more than 211,700 residents.

Springfield was originally settled in the early 1800s, around the time when Illinois became part of the United States. By the time of Springfield’s establishment, the main economical driver was of trapping and fur trading. 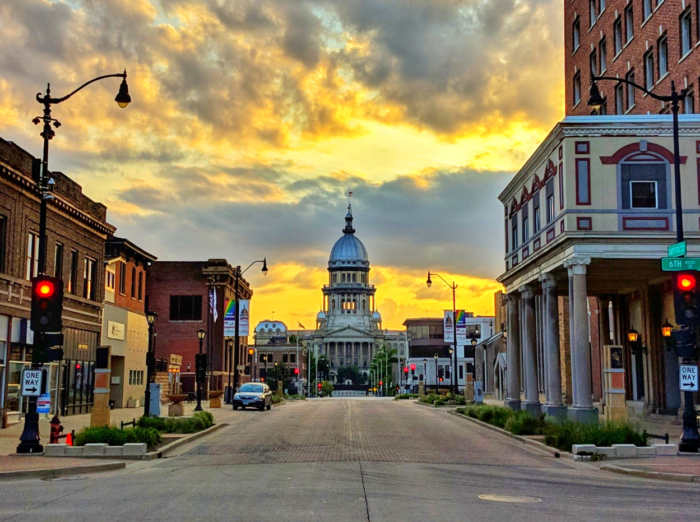 For the first couple decades of its establishment, settlers from Kentucky, Virginia and North Carolina came to Springfield to help develop the city. Over the past couple of centuries, Springfield has evolved into a large city with many top industries that include: trade, transportation and utilities, health care, government support, education, health insurance, and agriculture.

The growth in different job industries has led to creation of more than 30,000 jobs, with almost 3,500 people working for Memorial Health System alone. As of 2015, the largest Springfield employers include:

Apart from being the temporary residence of Abraham Lincoln in the 1800s, Springfield has been the home for several other prominent individuals. These individuals include John L. Lewis (labor activist), Vachel Lindsay (poet and writer), and Seth Barnes Nicholson (astronomer).

Over the years, Springfield has come to be known for its prevalence in the literary community, performing arts, festivals, and tourism. Springfield is also home to several minor league baseball franchises, indoor football teams, and assorted other sports franchises.

The Springfield city government is structured under a mayor/city council form of government. It is under this system where the mayor holds executive authority and serves in 4-year terms.

For businesses, there are a variety of collection laws valid in Springfield and the state of Illinois that rule how commercial debt collectors can collect debt from businesses. The legal interest rates are set at 5%, with judgments set at a 9% interest rate.